UP FROM THE SMOKY PITS

This is another in the running Calendar series on cultural scenes this one on Pittsburgh, whose Steelers probably will lose today’s Super Bowl game to the Rams. The writer, a native of Pittsburgh just back for a vacation visit, is a Times copy editor.

And he never sat in the end-zone seats at a Steelers game. 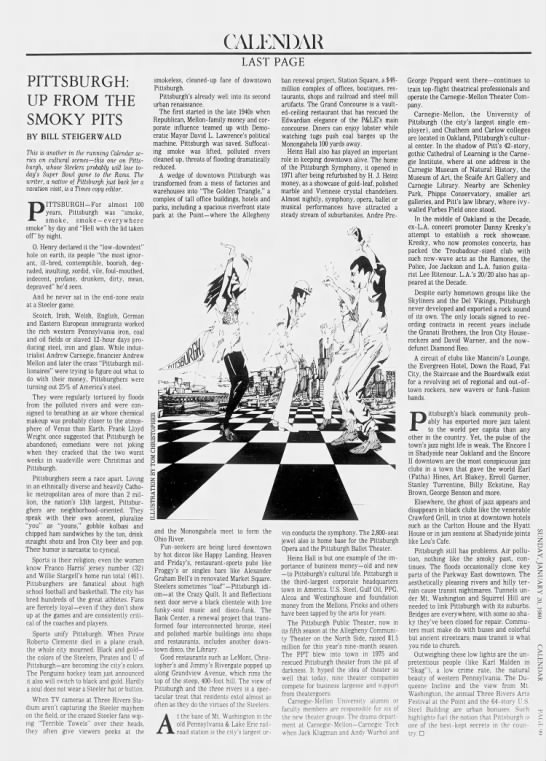 While industrialist Andrew Carnegie, financier Andrew Mellon and later the crass “Pittsburgh millionaires” were trying to figure out what to do with their money, Pittsburghers were turning out 25 of America’s steel.

They were regularly tortured by floods from the polluted rivers and were consigned to breathing an air whose chemical makeup was probably closer to the atmosphere of Venus than Earth. Frank Lloyd Wright once suggested that Pittsburgh be abandoned; comedians were not joking when they cracked that the two worst weeks in vaudeville were Christmas and Pittsburgh.

Pittsburghers seem a race apart. Living in an ethnically diverse and heavily Catholic metropolitan area of more than 2 million, the nation’s 13th largest, Pittsburghers are neighborhood-oriented.

They speak with their own accent, pluralize “you” as “youns,” gobble kolbasi and chipped ham sandwiches by the ton, drink straight shots and Iron City beer and pop. Their humor is sarcastic to cynical.

Sports is their religion; even the women know Franco Harris’ jersey number (32) and Willie Stargell’s home run total (461). Pittsburghers are fanatical about high school football and basketball. The city has bred hundreds of the great athletes. Fans are fiercely loyal even if they don’t show up at the games and are consistently critical of the coaches and players.

Sports unify Pittsburgh. When Pirate Roberto Clemente died in a plane crash, the whole city mourned. Black and gold the colors of the Steelers, Pirates and U of Pittsburgh are becoming the city’s colors. The Penguins hockey team just announced it also will switch to black and gold. Hardly a soul does not wear a Steeler hats or button.

When TV cameras at Three Rivers Stadium aren’t capturing the Steelers mayhem on the field, or the crazed Steelers fans wiping “Terrible Towels” over their heads, they often give viewers peeks at the smokeless, cleaned-up face of downtown Pittsburgh.

A wedge of downtown Pittsburgh was transformed from a mess of factories and warehouses into “The Golden Triangle,” a complex of tall office buildings, hotels and parks, including a spacious riverfront state park at the Point where the Allegheny the Monongahela meet to form the Ohio River.

Fun-seekers are being lured downtown by hot discos like Happy Landing, Heaven and Friday’s, restaurant-sports pubs like Froggy’s or singles bars like Alexander Graham Bell’s in renovated Market Square. Steelers sometimes “loaf” — Pittsburgh idiom — at the Crazy Quilt.  It and Reflections next door serve a black clientele with live funky-soul music and disco-funk.

The Bank Center, a renewal project that transformed four interconnected bronze, steel and polished marble buildings into shops and restaurants, includes another downtown disco, the Library.

Good restaurants such as LeMont, Christopher’s and Jimmy’s Rivergate popped up along Grandview Avenue, which rims the top of the steep, 400-foot hill. The view of Pittsburgh and the three rivers is a spectacular treat that residents extol almost as often as they do the virtues of the Steelers.

At the base of Mt. Washington in the old Pennsylvania & Lake Erie railroad station is the city’s largest urban renewal project, Station Square, a $48-million complex of offices, boutiques, restaurants, shops and railroad and steel mill artifacts.

The Grand Concourse is a vaulted-ceiling restaurant that has rescued the Edwardian elegance of the P&LE’s main concourse. Diners can enjoy lobster while watching tugs push coal barges up the Monongahela 100 yards away.

Heinz Hall also has played an important role in keeping downtown alive. The home of the Pittsburgh Symphony, it opened in 1971 after being refurbished by H. J. Heinz money, as a showcase of gold-leaf, polished marble and Viennese crystal chandeliers.

Almost nightly, symphony, opera, ballet or musical performances have attracted a steady stream of suburbanites. Andre Previn conducts the symphony. The 2,800-seat jewel also is home base for the Pittsburgh Opera and the Pittsburgh Ballet Theater. Heinz Hall is but one example of the importance of business money old and new to Pittsburgh’s cultural life.

Pittsburgh is the third-largest corporate headquarters town in America. U.S. Steel, Gulf Oil, PPG, Alcoa and Westinghouse and foundation money from the Mellons, Fricks and others have been tapped by the arts for years.
The Pittsburgh Public Theater, now in its fifth season at the Allegheny Community Theater on the North Side, raised $1.5 million for this year’s nine-month season.

The PPT blew into town in 1975 and rescued Pittsburgh theater from the pit of darkness. It hyped the idea of theater so well that today, nine theater companies compete for business largesse and support from theatergoers.

Carnegie-Mellon University alumni or faculty members are responsible for six of the new theater groups. The drama department at Carnegie-Mellon — Carnegie Tech when Jack Klugman and Andy Warhol and George Peppard went there — continues to train top-flight theatrical professionals and operate the Carnegie-Mellon Theater Company.

Carnegie-Mellon, the University of Pittsburgh (the city’s largest single employer), and Chatham and Carlow colleges are located in Oakland, Pittsburgh’s cultural center. In the shadow of Pitt’s 42-story, gothic Cathedral of Learning is the Carnegie Institute, where at one address is the Carnegie Museum of Natural History, the Museum of Art, the Scaife Art Gallery and Carnegie Library.

In the middle of Oakland is the Decade, ex-L.A. concert promoter Danny Kresky’s attempt to establish a rock showcase. Kresky, who now promotes concerts, has packed the Troubadour-sized club with such new-wave acts as the Ramones, the Police, Joe Jackson and L.A. fusion guitarist Lee Ritenour. L.A.’s 2020 also has appeared at the Decade.

Despite early hometown groups like the Skyliners and the Del Vikings, Pittsburgh never developed and exported a rock sound of its own. The only locals signed to recording contracts in recent years include the Granati Brothers, the Iron City Houserockers and David Warner, and the now-defunct Diamond Reo.

A circuit of clubs like Mancini’s Lounge, the Evergreen Hotel, Down the Road, Fat City, the Staircase and the Boardwalk exist for a revolving set of regional and out-of-town rockers, new wavers or funk-fusion bands. Pittsburgh’s black community probably has exported more jazz talent to the world per capita than any other in the country. Yet, the pulse of the town’s jazz night life is weak.

The Encore I in Shadyside near Oakland and the Encore II downtown are the most conspicuous jazz clubs in a town that gave the world Earl (Fatha) Hines, Art Blakey, Enroll Garner, Stanley Turrentine, Billy Eckstine, Ray Brown, George Benson and more.

Elsewhere, the ghost of jazz appears and disappears in black clubs like the venerable Crawford Grill, in trios at downtown hotels such as the Carlton House and the Hyatt House or in jam sessions at Shadyside joints like Lou’s Cafe.

Pittsburgh still has problems. Air pollution, nothing like the smoky past, continues. The floods occasionally close key parts of the Parkway East downtown.

The aesthetically pleasing rivers and hilly terrain cause transit nightmares. Tunnels under Mt. Washington and Squirrel Hill are needed to link Pittsburgh with its suburbs. Bridges are everywhere, with some so shaky they’ve been closed for repair. Commuters must make do with buses and colorful but ancient streetcars; mass transit is what you ride to church.

Outweighing these low lights are the unpretentious people (like Karl Malden in “Skag”), a low crime rate and the natural beauty of western Pennsylvania. The Duquesne Incline and the view from Mt. Washington, the annual Three Rivers Arts Festival at the Point and the 64-story U.S. Steel Building are urban bonuses. Such highlights fuel the notion that Pittsburgh is one of the best-kept secrets in the country.

Posted in Pittsburgh and tagged 1980, Los Angeles Times, Pittsburgh, Pittsburgh Renaissance
← The NY Times blames a government ventilator scandal on the private sectorHollywood hasn’t discovered my ’30 Days a Black Man’ history book yet. Perhaps no one out there has read the ‘haunting’ and ‘rollicking’ tale or seen these kindly blurbs from some smart and talented fellow journalists. →

Get Updates in your Email